System Shock 2: After the Von Braun 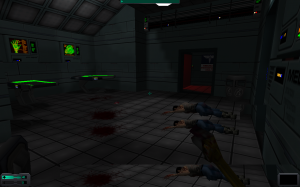 So We’ve all had several days to let the fact sink in that System Shock 2 is again legally purchasable. If you’re in the first batch of people that  got a copy you might by now be finished with your first play-through. OK Fine the graphics look dated and the ending left things wide open for More but for legal reasons I doubt there will be a System Shock 3 and for storytelling reasons I hope not.

Keep in mind Night Dive only has, if my armchair legalese is correct (I am Not a Lawyer) they only have the right to distribute and Star Insurance still retains the rights it had gotten from looking glass. Whether or not EA factors into any of this or not remains to be seen, but for now it is probably best to consider the franchise not going ino sequels. After all there’s only so many times a villain can show up and still feel like a credible threat.

Anyway, if you’ve set aside a sizeable chunk of time and managed to beat the game, you are probably asking yourself ‘Now What?’

Well for starters you can add graphical mods to breath a little fresh life in. There is no one unified ‘apply this and everything changes’ mod as such, mostly because while the older members of the System Shock community can agree that the Shock Texture Upgrade Project is well worth completing (and it is all but finished) due to how the game had worked up until the NewDark patch (which is included in the GoG release, so no worries friend you’re safe) things like replacing floor textures or monitors have been reliant on more extensive measures. However while in the past it’s been a headache things are now to the point where one can practically drop mods in the DataPermMods folder and roll with it.

So what can be done? It can take a game that looks like This stock:

And turn it into This with several mods applied: 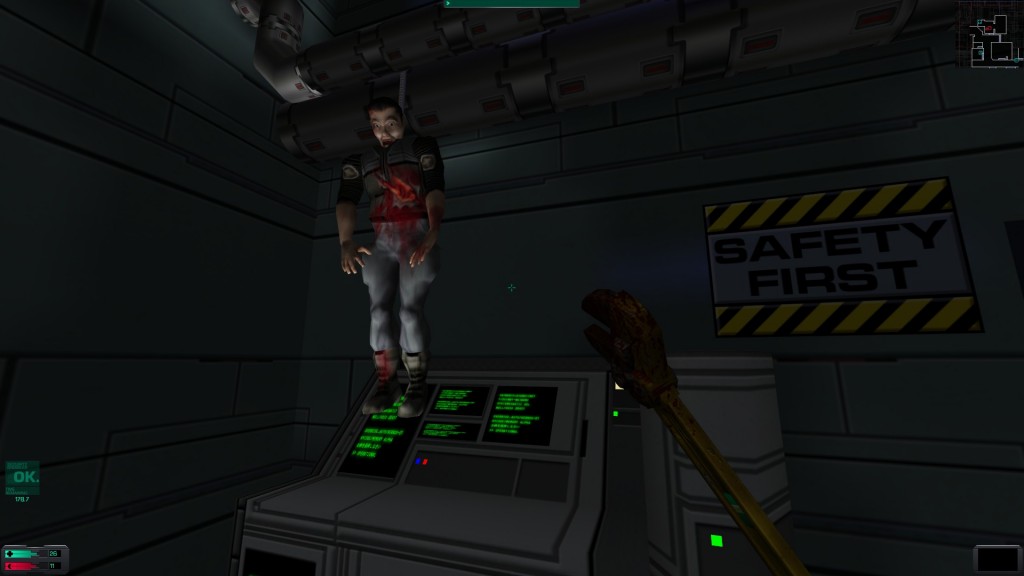 Granted that’s with several mods applied (Rebirth, Tactacool’s Wrench, Shock Texture Upgrade project, and possibly even 400. Thankfully all can be found at System Shock’s Community Mod Site. However due to the nature of older mod managers it takes some slight doing to make everything work properly, especially in instances where you go beyond doing a facelift to the game and want to, Like with SecMod or Straylight’s Anomalies, Discrepancies and outright Bugs Mod change gameplay (or in ADaoB patch gameplay quirks) not all mods are compatible with eachother. Fortunately User Kolya and others are working on better options so you aren’t in constant fear that if you want to revert from a modded state, or possibly switch mods, that you might fry your game install and have to start from scratch.

To all those that might be worried at whether or not all this is compatible with your fresh GoG installation, or that the older retail CD version might be left out in the cold with all this work? Don’t worry, even though the GoG version uses an older patch tool steps have already been taken to ensure that SS2Tool (the preferred patching utility, at version 5.0 as of the time of this writing) will work with both versions of the game.

But what if you want more than a fresh coat of paint? Fortunately we’ve got you covered there too.   Instructions on systemshock.org are easy enough to follow and all it really takes is editing a config file, making a folder, and unzipping your fan-missions into that folder (ie unzip ponterbee in the fm folder so it’s FM, Ponterbee, and mission files live in that subfolder.)  From there, if you’ve edited your config correctly (really it’s just uncommenting a line, but please for the love of Cyberpunk don’t forget to back things up first. That’s always important.) You will be greeted with a popup asking what mission to play or if you want to skip to the stock game. Keep in mind any gameplay mods (SecMod and ADaoB come to mind) do not work with Fan Missions unless applied to that mission.)

With that said let’s look at some personal favorites:

Christine’s Quartet: Actually my first and main mission(s) of discussion are actually four well crafted fan-missions that tell a story arch starting with a grunt joining the UNN and ending with him getting bored out of his mind from an enforced vaccation after a long series of… well… going through Hell. Overall I have to say Christine does a wonderful job, in fact personal opinion is she’s better than the actual game designers, in making a believable world through architecture.

One example of this are the Quantum Bio-Reconstruction booths (the Cheat Death and Give Him the Middle Finger booth.) Generally speaking each is set somewhere that feels like the ship/station/etc designers realized how important a Death Cheat Respawn Booth would be so give it it’s own little room you stumble out into and usually a medical bed nearby to heal with (if you have a key to attach to it.) Hallways have a feel like if you cleaned up the mess and got rid of the mutants they were lain out like you would for good traffic flow, places to sit in alcoves, decently placed restrooms. There’s even custom models for cabinetry and other knick-knacks like pencils and binders, books. OK fine i know it’s all sounding silly but it’s the little touches that make a place feel alive and Christine, with the help of several modelers and lots of other fan assistance, knocked it out of the park.

Unfortunately, while it is very good that Christine got voices for almost all of the logs in her mission-sets, due to the realities of asking a bunch of random people on the internet to do VA work the quality is mixed. However the writing is, even though English isn’t her first language, generally well done. Bits of humor thrown in with day to day life along with horror alongside getting you the information that you need to know to move on to the next disaster. Another ‘ding’ I’d have to take points off for is that these missions lack maps. Sure usually you can find your way pretty easily due to reasonable and logical layouts but it’s one of those things that would be helpful since placing nav-markers with annotations so you know where caches of supplies that you can’t lug around constantly is quite handy (in addition to marking where the upgrade rooms are after you’ve found ’em but want to come back later.)

To cap it all off, especially for Ponterbee Station since it’s the first in the series, Christine went to the trouble of making earth.mis files so you’ll be able to (in theory) enjoy these with your friends. in co-op. This ‘earth’ you’re dumped into isn’t just a tram station and a tutorial building. No my friends there’s traffic, civilians, shops (sadly none of them sell weapons. Oh well,) nd while little of it is important from a game-play perspective it adds to the sense there is a world beyond the space horrors you have to face. While there isn’t a System Shock 3, and I hope there never will be, this is probably as close as we’ll ever get.

RttUNN: Christine wasn’t the first Fan Mission author. I’m not even sure if this guy was either, but it’s the first fan mission I can recall playing. Starts you off in a very Half-Life sort of way with you heading into work normal day normal Whatever and then all hell breaks loose. While this one also has outstanding visuals and some awesome moments (the corridor of cyborg ninjas. If you’ve played it you know what I’m talking about. *shudder*) it is far shorter than Ponterbee even in it’s earliest incarnations and to be fair it is still quite enjoyable and the environments are varied. If it were made a year or so later after the community started getting fixes for ShockEd (the level and resource editor for System Shock 2, Thief, and other Dark Engine games) it probably would rank up there with Christine’s mission sets. Play it, it is hard, you’re dropped into a zombie filled mall at the start and it really doesn’t let up on any difficulty.  Thanks for scaring the ever loving crap out of us Baydess99.

Zygo’s Arena: This is very un-shock-like. It is, thankfully also very very multi-player friendly in that while there is some hacking and exploring to be done it is really just a case of frag the living daylights out of Everything. It doesn’t open you up with Everything though. There’s something of a story that uses bits of audio from both system shock 1 and 2 but really it’s just atmospheric stuff for the most part. Item drops are random, CyberModules are pretty easy to come by and while there is no map in the beginning it’s one of the things that unlocks as you progress. Hard? Yes. Lot of fun? Also yes. Sure it ditches the creepy atmosphere for the most part in favor of murder everything fragging, but that doesn’t make it bad. It’s a fun change of pace. It took this guy Years to build, probably mostly because of the scripting and relevant testing ot make sure it works, but for anyone that wants something a little different, or something easy ot drop into with a friend or three this is what I recommend. Zygo, hats off to you man.

There are other fan missions but these there (OK technically six) are what I’ve singled out as Must Get material.  I don’t intend this as a slight to any of the other fan offerings (one of these being Christine making an interesting exploration level using textures and assets from Thief and it’s a quality work so i”m not excluding due to poor quality.) It’s just these are what I consider Must Play gems, especially if you’ve already beat the main game and want something else to do with your ten dollar investment.

For thirteen years the System Shock 2 Fan Community has been relatively Small and no thanks to how buggy ShockEd has been up until recently only those really dedicated could make it do anything really interesting and noteworthy. Now though with NewDark giving several stability fixes and limitations removals to the editor and GoG providing lots of fresh blood. if we can avoid the community splintering and fragmenting over petty arguments things are bound to only get better.

Currently there’s talk of re-doing all of the character and other game models because ReBirth, while good, was made before NewDark and there’s a feeling that things can be done Better now.  I’m hoping that some old efforts to expand and spice up the Rickenbacker get picked back up as well as a few other half done things that, while possibly a bit un-true to the original game would make for interesting twists in second or fifteenth playthroughs. If nothing else a new Mod Manager will go quite nicely (and one of the few things I see that whoever made the NewDark patch should have tried including. After all there’s already a Fan Mission selector, why Not? Oh well done is done.)

Everything discussed in this article can be found at SystemShock.org.