Super Smash Bros Brawl. The Best Wii Had To Offer?

As I mentioned before long combos are not to be worried about here. You have you usual punches and kicks at the press of the A button with a direction on the analogue, special moves with the B and direction buttons and jumping with Y. It’s simple enough for newcomers to have a blast but with blocking, dodging and Smash moves to master too there is actually a surprisingly deep game to uncover here for those willing to put in the time. Once you’ve gotten to grips with your favourite characters you’ll learn their strengths and weaknesses and when best to use them. However it’s been that way since day one. What exactly is new in Brawl?

Well it’s the little additions that make the difference. Final Smashes have been thrown in to up the chaos rewarding the player who destroys a special floating glowing ball with a extra powerful special move. These can range from Sonic turning into Super Sonic and flying around the arena smashing anyone in sight or Samus unleashing a devastating hyper beam before losing her famous suit. They are a fun addition and can really shift the momentum of the match when you least suspect. Like Pokeballs that let loose Pokemon who help and damage anyone around them items called Assist Trophies offer a similar advantage but use characters from other games. The Excitebike riders in their 2D form run down your opponents or Shadow the Hedgehog slows down time for everyone. Other new items make appearances and it feels slightly harder to eliminate opponents now but other than that it’s… well… Smash.

For the lone player you’ll be spoiled with the number of modes at your disposal. Returning modes like Classic (where you take part in eleven or so random battles) and All-Star (which again involves fighting every character in the game with only one life) are back offering a decent challenge. If mini games are your thing than look no further as the Stadium section has what you need with home run contest (beat a sandbag and hit it as far as possible with a baseball bat) and multi-man brawl (beat on as many enemies as possible) here as well as break the targets. (which sadly only has five unique levels rather than one for every character). Note though any of these (apart from Classic mode) can be played with a friend in co-op which is a great new addition.

The big single player experience is to be found in the Subspace Emissary though. Here you’ll find an eight or so hour adventure that focuses on platforming based battling rather than static fights. Split into over thirty chapters you take control of several characters in each and make you way through jungles, mountains, boss encounters and more. It is an okay attempt at something a little different, but the platforming parts don’t feel totally right with the control scheme here causing some unwanted deaths. On the upside it is cool seeing all these gaming legends in one place fighting side by side when you’re used to only seeing them in their own titles. 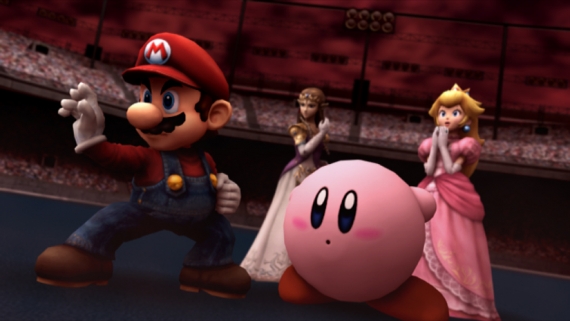