Super Smash Bros Brawl. The Best Wii Had To Offer?

Rarely is it that I ever import a game before it hits the UK, and it’s even rarer that I do so as soon as the game hits the US shores. Super Smash Bros Brawl was different though. You could say it was a mixture of reasons as to why I jumped the gun rather than wait for a PAL version, whether it was sheer excitement or the ridiculous attitude Nintendo had taken in not even giving a European release date for such a huge title. Within minutes of my first four way battle between Mario, Link, Kirby and Olimar it was obvious I’d made the right choice.

Super Smash Bros isn’t your average fighter. Gone are health bars, endless strings of combos to learn and ridiculously accurate timing to the point of being nigh impossible for most gamers. Instead you have a unique take on KO-ing your opponent and a simple battle system that has hidden depth as well. Brawl has you choose from one of over thirty Nintendo and third party mascots, then duke it out on a themed arena based off of a famous IP. Elimination is done so by inflicting enough damage on your opponent so they get blasted so far off the stage they can’t get back. Every time you punch, kick, shoot a fireball, throw, uppercut, whack or do any move you cause a percentage counter to rise for your opponent. The basic idea is the higher the percentage the further your character will fly when they get struck. For example if Mario has 13% damage he isn’t going to go very far when hit by Bowser, but should he find himself reaching 100% damage one massive butt bash from Bowser will surely shoot Mario out of the arena. You can either get hit so high you disappear into the background, left or right of the stage or down below if you simply can’t make it back on after being pounded away. That is the idea of Smash Bros and it’s been that way since the first title on the Nintendo 64 so it’s great that much hasn’t changed here. 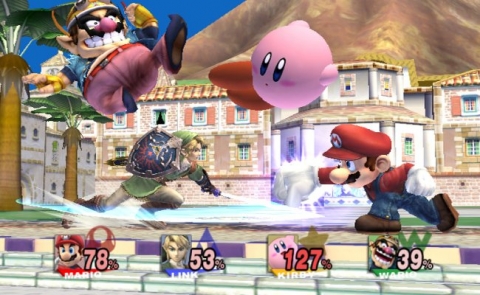