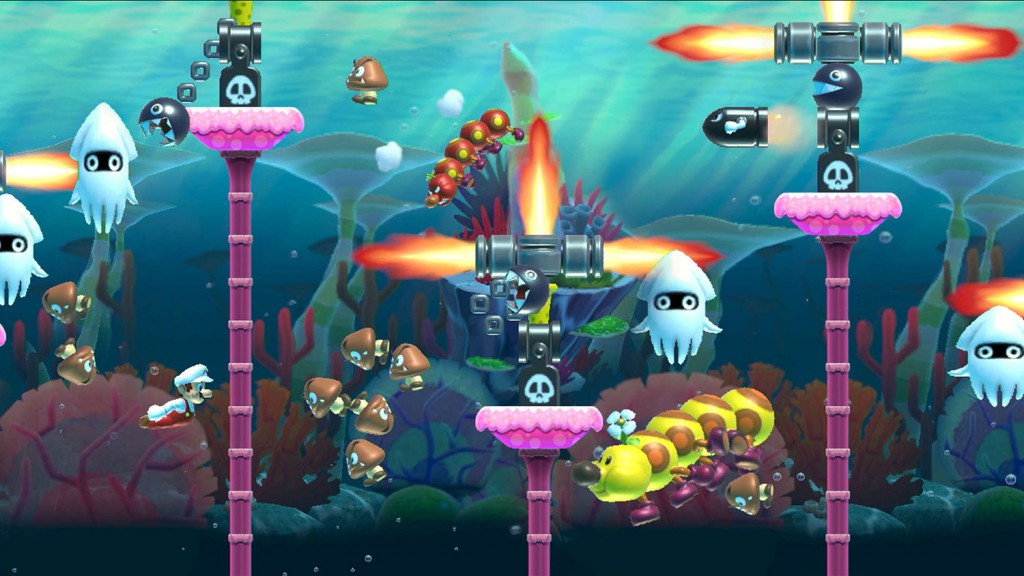 Super Mario Maker’s initial announcement back at E3 last year had me a mixture of concerned and excited. While the idea of creating your own Mario stages seemed like a brilliant idea, this also meant there was plenty that could have gone wrong. How would the physics handle? How deep would the design aspects go? Would we be able to share our creations with the world? There were certainly high expectations when it came to delivering the first true, official Mario creation tool and when all was said or done, Nintendo were either going to nail it or deliver a totally missed opportunity. So nervously we ask ourselves, which was it?

You can breathe a sigh of relief, Super Mario Maker delivers in all the key areas.

When it comes to a creative game like this where do you begin? 10 Mario Challenge is a good starting point, allowing you to tackle eight randomly picked stages from a pool specifically created by Nintendo themselves. Not only do they prove good fun, but also help inspire by displaying ideas you might not have even considered yourself. 100 Mario Challenge meanwhile expands this pool to stages created by… well pretty much anyone. Handily rather than having all stages thrown together, they’re broken down into easy, normal and hard. Completing one of these groups successfully then unlocks different costumes for the mystery mushroom used in the original Super Mario Bros skin. Everything from Luigi and Peach to Diddy Kong and Waluigi are included and while they don’t add anything gameplay-wise, they do offer plenty of neat audio cues and call-backs when used.

One thing that had many concerned was how the game controlled between the four different styles. Of course as any Mario fan will tell you, the way the portly plumber handles between each of his adventures feels very different. The original FEELS different to the third which feels very different to World which again feels different to the New series. While all styles handle in the more modern New Super Mario Bros series, certain abilities can only be used in certain games. New Super Mario Bros for example retains the wall jump, while this and World also sports Yoshi. Super Mario Bros 3 meanwhile brings back its raccoon leaf and P-meter. All things considered it makes sense Nintendo went in this direction especially when you consider that the game lets you switch styles on the fly. While purists will complain the physics remain constant between the four, the rest will barely notice.

On the creation side of things, the tools themselves couldn’t be easier. Much like a Nintendo game in itself where the formula usually follows the rule of “easy to learn, tough to master” the same can be said with creating a level in Super Mario Maker. While you can easily place some pipes, Bowser and a few fire flowers around to create a relatively playable stage, it takes time and practice to really take advantage of the deep tool set at your disposal. Whatsmore creating your own stages feels brilliant. The sense of accomplishment when you finally figure out a section of your latest stage or load up the game to see five new people have awarded your level design a star is great and I can’t remember the last time a creation focused game had me actually… well… creating as much as playing.

While the tool set available in Super Mario Maker certainly offers the key features you’d expect (as well as a few you didn’t) – Yoshi, feathers, Koopas, Bowser, pipes, doors, scrolling stages and moving platforms to name a few, it’s also missing a large portion too. Charging Chucks, different themed stages, star coins, checkpoints… I could go on and on. It’s hardly surprising and I’m not for one moment claiming what is included here isn’t enough but should Nintendo want to keep gamers coming back, downloadable content with new items to use could be just the ticket. We’re already seeing plenty of fantastic stages popping up, just imagine how ambitious things might get should the toolset be expanded further.

I’m sure by now you’ve all heard about the infamous way in which the game drip feeds you extra items and while the method itself seems a little clunky, you can see why Nintendo at least tried to do this. Even with the ten or so items the game starts with I found myself having a blast and actually taking the time to experiment and learn each whereas had the game thrown every single item my way right off the bat, I’m sure things would have been a lot more overwhelming. However having to spam items or wait until the following day to unlock more content isn’t the best way to go about this. It would have been better to allow the user to choose when they want more objects to play around with.

The way in which you share your levels is a little bit of a mixed bag. For every feature that makes sense, there are several questionable ones that accompany it. Sure you can upload your creations for all to see and also browse the highest rated or newest ones, but when it comes to searching for a particular creator or stage, it can’t be done. What’s more there are no filters that might eliminate say, all underwater or New Super Mario Bros stages. Unfortunately you cannot upload or download four level worlds – sure you can download individual levels and save them locally but it’s a process that feels more arduous than it needs to be. So yes while the online functionality is in place, but it definitely needs some fine tuning.

While a creation tool might seem like a fairly standard affair when it comes to style and pizzazz, Nintendo have somehow managed to inject their own quirky character into every section here. Whether it’s the shaking of Koopas to change them from green to red or the way placing items on your stage plays notes in tune with the game’s music or even the small, random call-backs to the much beloved SNES classic Mario Paint, the game simply oozes charm.

Super Mario Maker is the game we all dreamed of having as kids. Thanks to an intuitive tool set, decent sharing facilities and excellently quirky presentation values, Nintendo have given its fans the chance to in essence create their very own Mario adventure no matter how crazy it might be.

Summary: A risky move on Nintendo's part giving gamers the tool set to create their own Mario adventures but one that has paid off big time. Plenty to see and create this is a must for any Wii U owner.