It seems the lengthy delay has helped the development team cram as much content as possible into Legends resulting in what may well be the biggest 2D platformer I’ve played since… well Rayman Origins. While you have the six main worlds to conquer, forty stages also make a return from Rayman Origins albeit with Legends new visual sheen. It’s testament to the talent of Michel Ancel and his team that these levels still hold up extremely well and are still fun to revisit even if you experienced the game two years ago. Kung Foot is a simple game of football where players use their punches and kicks to hammer the ball into the opponent’s goal. There are no fouls and no real rules to speak of, just score as often as you can in the time limit. This could easily have ended up being a boring throwaway, but fact of the matter is, it’s actually great fun and very addictive especially when you get some friends together.

The final piece of the Rayman puzzle is the game’s Challenge mode that throws daily and weekly challenges your way in which you compete with players from around the world. These test your speed, collecting and general platforming ability and offer the kind of “one more go” feeling as you vie to best you last score and rise up the leaderboard. 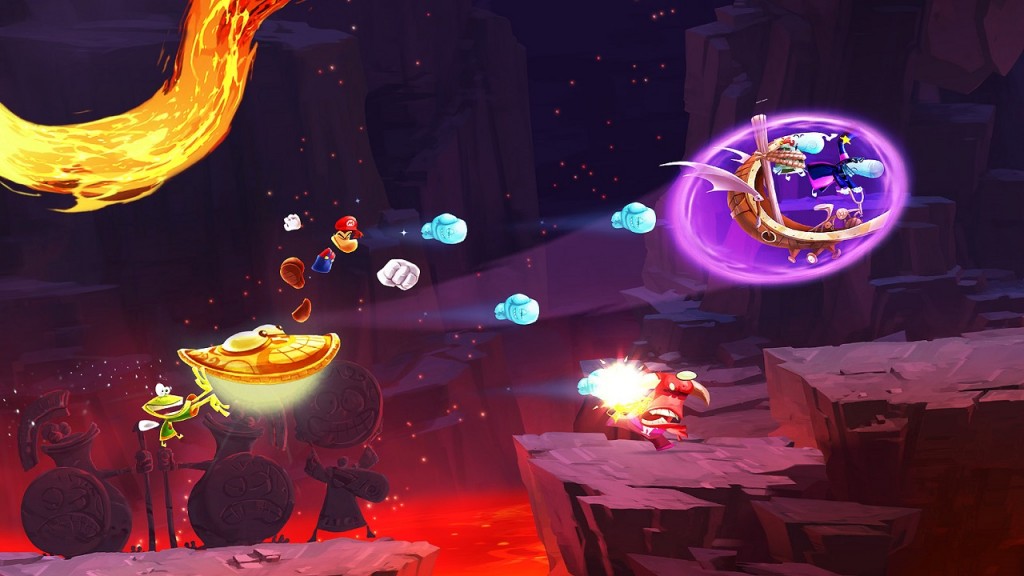 Rayman Legends is absolutely stunning. The almost paintbrush style artwork pops right off the TV screen with Rayman, his buddies and their enemies all animating beautifully and with a huge amount of character. Watching Globox and Rayman slapping each other silly still remains one of the most amusing sights in any platformer. The environments themselves too are bright and full of little details that help bring the worlds to life - from scurrying mice in the foreground of a dank dungeon to flying dragons swooping out back. Much like the game’s visuals, the music here is top of its class too. The blend of calming and quirky suits the game’s feel to a tee.

Rayman Legends is an outstanding example of the platforming genre at its best. While it’s easy to dismiss the game as “just another 2D platformer”, you’ll be missing out on one of the most enjoyable experiences the gaming industry has thrown our way this generation. The sheer number of inventive ideas, the memorable visuals, intoxicating sounds, general high level of polish and not to mention the exceptional use of the Wii U Gamepad all round off what is easily the best title the system has to offer.