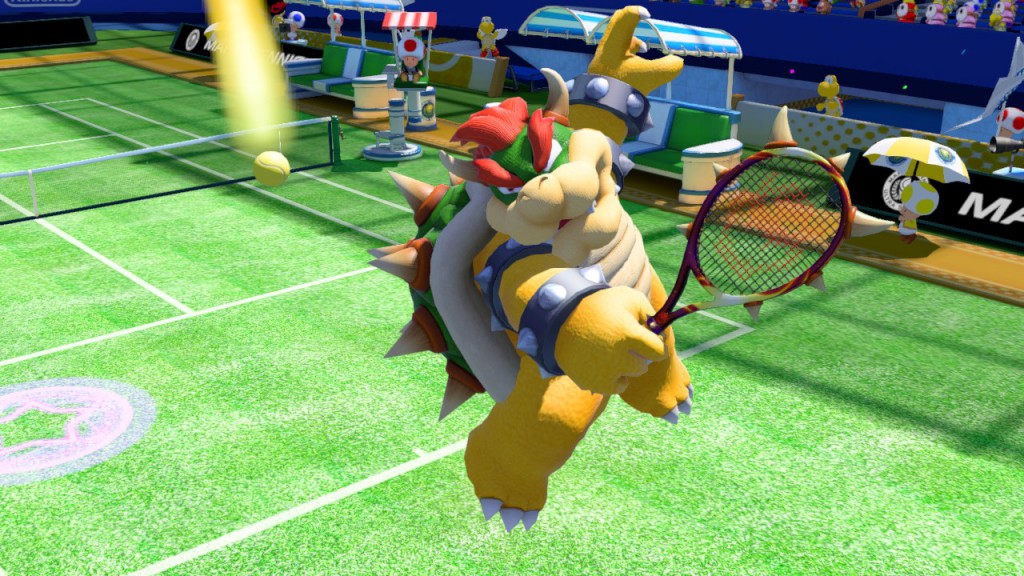 I cannot begin to tell you the number of hours that have been lost hitting the courts with Mario and his pals, whether it be in classic form on the Nintendo 64 or with added time-stopping moves in Mario Power Tennis. While the red plumber’s platforming adventures often took centre stage, the tennis series delivered a fantastically fun offshoot that truly excelled when bringing four people together. That mix of simple yet deep tennis gameplay with the wacky ideas of a Mario title helped each new release stand out from the more realistic takes on the sport.

Which is why it pains me all the more to see this once beloved spin-off fall so far with Mario Tennis Ultra Smash. Not only is this the most disappointing the series has ever been, it’s also an extremely hollow experience that lacks that usual Nintendo magic.

I’ll admit though, the tennis itself is solid and still retains that same satisfying feeling when you deliver a brutal smash or well-placed slice past your opponent. Chance shots also make a return and once again are something you’ll either love or hate. These award players who happen to press the correct button prompt over highlighted sections of the court with special shots that might send the ball back at fireball speed or curve like a boomerang. It’s the closest the game gets to being truly “Mario” in its style but can also be turned off for those who just want to play a simple game of tennis.

The much advertised Mega Mushroom mode does exactly what you’d expect. Randomly throughout your match, Toad’s will throw the power-up onto the court granting your player brief bursts of increased size and power. It’s very uninspired and only managed to remind me how much I enjoyed the Mario Kart-style mode in past games that saw red shells, banana peels and the like being used. This just feels stripped down.

Decent mechanics will only get you as far as the range of modes that accompany it though and unfortunately Mario Tennis Ultra Smash doesn’t even come close to satisfying.

Mario Tennis Ultra Smash lacks any sort of substantial single player mode instead throwing players into a series of tie-breaking matches with the line-up of characters one by one. Continuing to do so unlocks “Star” variations of players along with small handfuls of coins to spend on the meagre choice of unlockables or upgrading your Amiibo (more on that later). It’s a pitiful attempt at providing any sense of satisfying progression to the player and feels like a real step-back from the tournament modes featured in other sports titles.

Surely the mini-games save the package though right? Wrong. Again these little gems are missing in Ultra Smash, and in its place a simple Rally Challenge that sees you hitting a ball back and forth for as long as possible. That’s really it.

The court selection doesn’t fare much better sadly. While previous entries in the series would see you hitting the fuzzy ball about in jungles, deserts, the original Mario Bros and plenty more wild locales each with their own unique gimmicks and obstacles, Ultra Smash instead opts for simple floor changes. While this does affect the bounce and speed of the ball, playing with the same backdrop over and over only serves to highlight the game’s barebones feeling. The Mario universe offers such a vast and colourful catalogue of imaginative worlds and to see not a single one utilized here feels like such a missed opportunity. The same goes for the cast of characters which again feels like a mixed bag of unsurprising or unwanted faces. Even worse is the slim lined number on offer here with Ultra Smash totalling a measly sixteen.

Expected feature elsewhere but a relieving appearance in a Nintendo game, online offers players the chance to take on others across the globe competitively or just for fun. While all the games I played suffered very little lag, I quickly grew tired of singles competition, yearning for some doubles action instead. Unfortunately (and bizarrely quite frankly) doubles matches are restricted to those with an Amiibo to train or with a friend on the same system. Why I can’t join another random player online is dumbfounding and a real sore point.

On the subject of Amiibo, the functionality here is limited and kind of dull. Scanning a character onto the Gamepad will bring them to life as a tennis partner where you can then train and level them up. The more you use them, the better they get. It’s hardly inspired stuff and like most Amiibo support out there already feels shoehorned in.

On the bright side Mario, Luigi, Toad and the rest of the crew have never looked so good animating slickly and showing plenty of character with every swing of the racket. Slow motion replays only serve to highlight their facial expressions. Unfortunately the soundtrack features a mish-mash of forgettable, generic tunes while characters use the same voice samples we’ve heard so much in previous titles.

If you had to summarise Mario Tennis Ultra Smash in a handful of words it would be rushed, unimaginative and empty. The game’s mechanics are still fun despite very little change over the years but it cannot save what feels like a mere filler title Nintendo have pushed out the door in time for Christmas. After seeing everything the game has to offer in less than an hour you’ll want to move on to bigger and much better things. A real shame.

Summary: The worst the series has seen and a generally dull tennis game from a developer that has proven its capable of much more.