I’m currently halfway through the Quattro of episodes for Resident Evil Revelations 2 and while I will be posting a full written review once the final piece of content is out, I figured I’d offer a brief overview of the adventure so far.

The campaign is actually split into two separate stories; Claire Redfield and Moira Burton (Barry Burton’s daughter) and also Barry himself along with a little girl called Natalia. Both take place within the same location (a creepy isolated island) although each with their own subtle differences. Episode one for example sees Claire and Moira making their way over to a radio tower across a highly damaged bridge while Barry and Moira attempting to reach the same milestone instead take a long detour around. It’s an interesting idea but one that can result in plenty of repeated footsteps.

If episode one served to ease you into the nightmare ahead then the second is your first real test. For both the Claire and Barry story the enemy count is upped with plenty of tense moments that see you defending a bar being overrun with the infected and taking on boss battles aplenty. In an interesting twist, Natalia’s ability to see enemies through walls suddenly makes sense as Barry is later faced with completely invisible foes in episode two. With Natalia screaming for you to focus your aim left and right until your target is found, it can be tough and extremely nerve-wracking. This is the sort of thing I want from a Resident Evil experience. 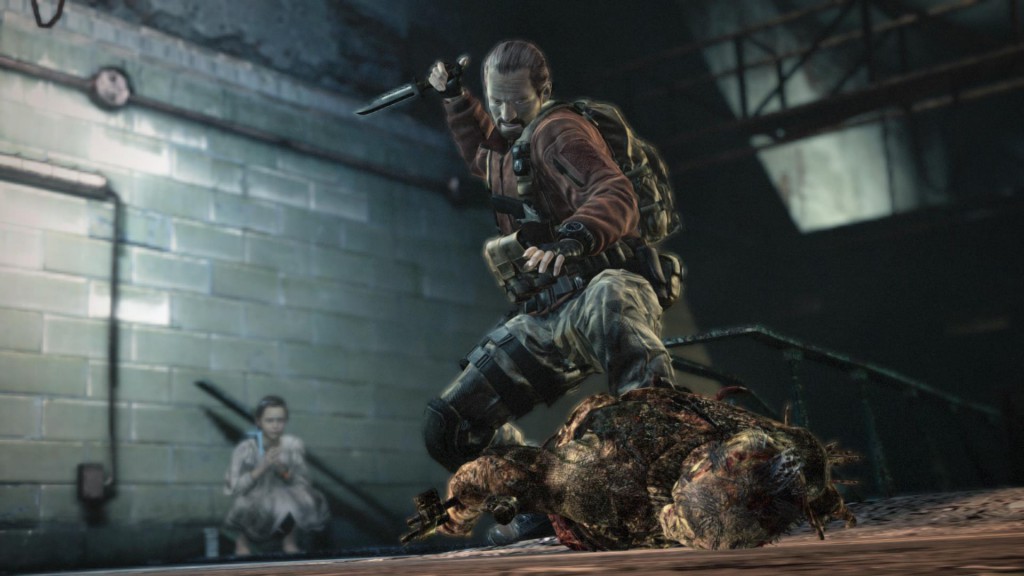 A big let-down as far as the first two episodes go are the locations in which you find yourself exploring. It’s all rather… uninspired. So far I’ve seen an old abandoned prison, village (that looks as though it could have been straight ripped from Resident Evil 4) and industrial city area. It’s not that they’re out right bad, it’s just the sort of expected locations we’ve seen so many times before within the genre and Resident Evil series itself. Here’s hoping episodes three and four take us to some more interesting locales.

Another area Revelations 2 seems to falter is in the visual department. It’s clear this was likely a game designed with the last generation of consoles in mind. Textures appear blurry and downright ugly in places while character models also show their frayed edges. The game itself isn’t necessarily awful to look at, but when you couple that with some uninteresting environments it’s a bit of a letdown.

It’s the game’s Raid Mode that will likely absorb most of your playtime with every episode adding new characters, maps, missions and more. So far I’ve been making my way through the first series of missions and while things have been slow going (enemies are slow, weak and not too much of a threat), there definitely seems to be potential. Here’s hoping the difficulty steps things up further down the road.

Despite its archaic feeling, my time spent with Resident Evil Revelations 2 has been entertaining. While it certainly feels like a step up after the misfire that was Resident Evil 6, it’s hard to see this being any more than a brief distraction. Who knows? The final two episodes could deliver some of the best Resident Evil we’ve yet to see right? Right?